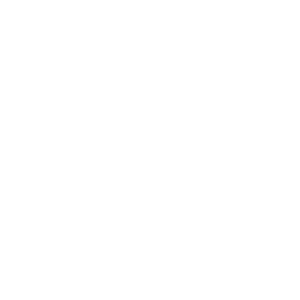 There are many reasons to consider manufacturing in Mexico, and convenience is one of them. The country’s shared border with the US has the potential to save you considerable time and money. Recent advances in technology and infrastructure have made it easier than ever to manufacture in Mexico. If you’re thinking about moving your supply chain outside of China, it might be time to consider leaving Asia altogether. 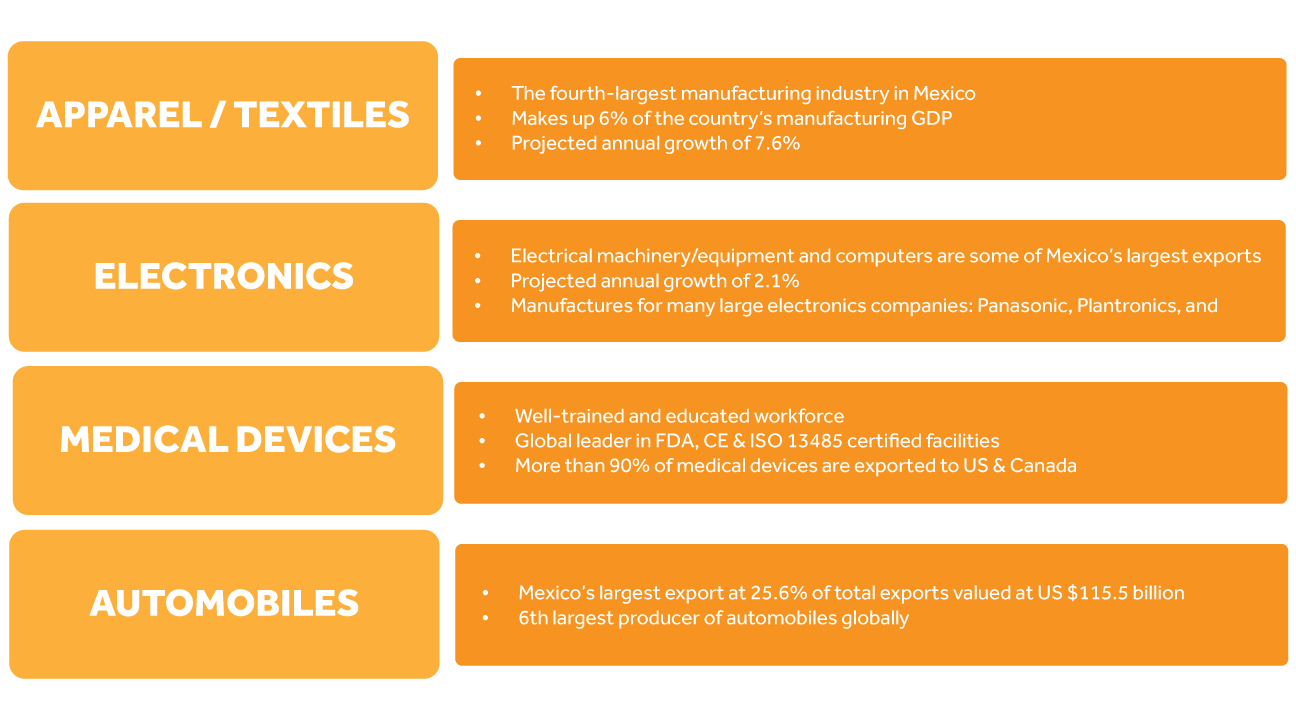 Similar to those in the US, Mexico has strict laws and regulations in place to protect the environment. The General Ecology Law (LGEEPA) covers pollution, conservation, and enforcement. As the country continues to industrialize, the government has adopted laws to further protect the environment.  LGEEPA has been in place since the 1980’s, but Mexico has recently made even more strides towards sustainability. In 2013, the state ended its monopoly on energy and increased the use of renewable energy resources.  In 2015 the nation became the first developing country to formally promise pollution reduction in the face of climate change. The country’s goal is to reach 30% clean energy by 2023.

Mexico is considered one of the most advanced developing countries in the world because of their GDP. However, even with significant industrialization, the country has failed to reach developed status due to high levels of poverty, lack of quality education and healthcare, and limited clean water access. Mexico ranks 158th for GDP growth, averaging an annual rate of 2.43% in the last 25 years.

Don’t be fooled by the developing status of Mexico though—the country has tons of advanced technology, allowing them to manufacture much more than just apparel. With specializations in aerospace equipment, consumer electronics, automobiles, and medical devices, Mexico is clearly capable of manufacturing complex and challenging products. Other technological advantages in Mexico include experienced IT support, access to high-speed internet and telecommunication, and advanced computer technology.

Mexico ranked 60th in the 2018 EODB (World Bank’s Ease of Doing Business Survey). Despite their poverty and other struggles, the country ranked 49th in overall quality of infrastructure, and 40th in transportation in the 2017-2018 Global Competitiveness Report. These rankings are notably high for a developing country. The country has multiple ports on both the east and west coasts, new highway systems, and railways that connect the central regions to the border. Previously, manufacturing was focused mostly in the border region, but infrastructure improvements have helped the industry to expand. Because of its close proximity to the US, the country is able to offer lead times as low as 24-48 hours, depending on the product and factory location. 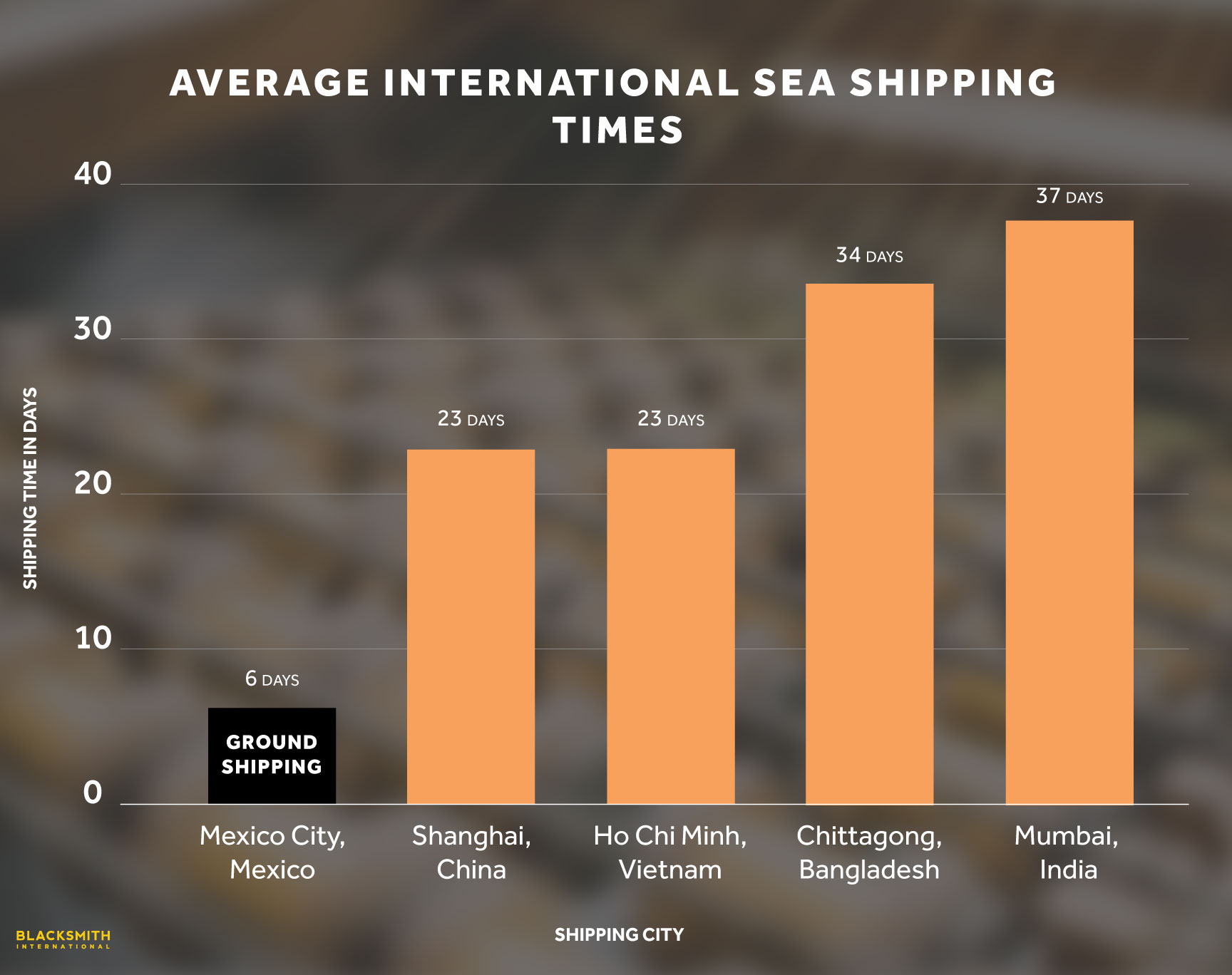 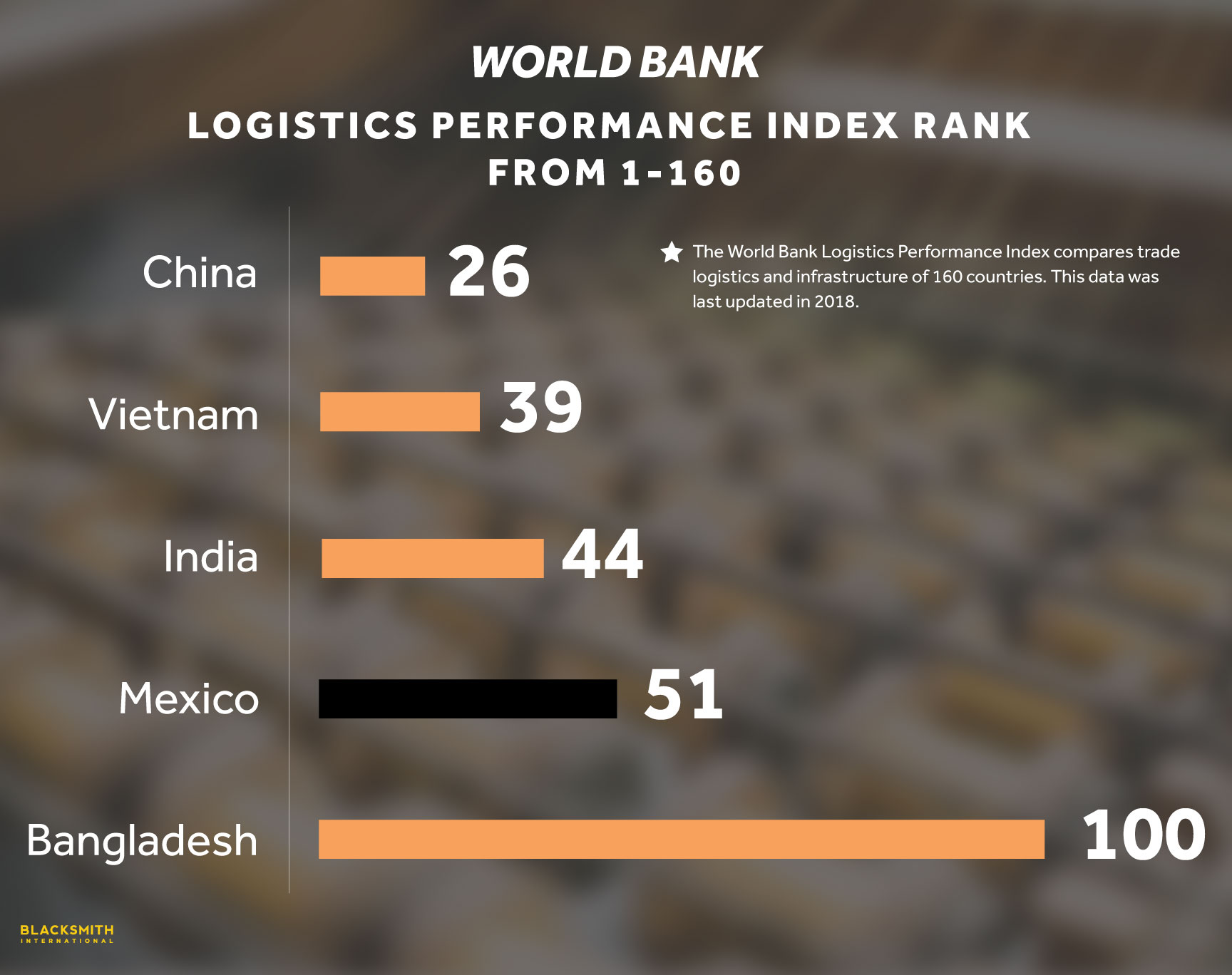 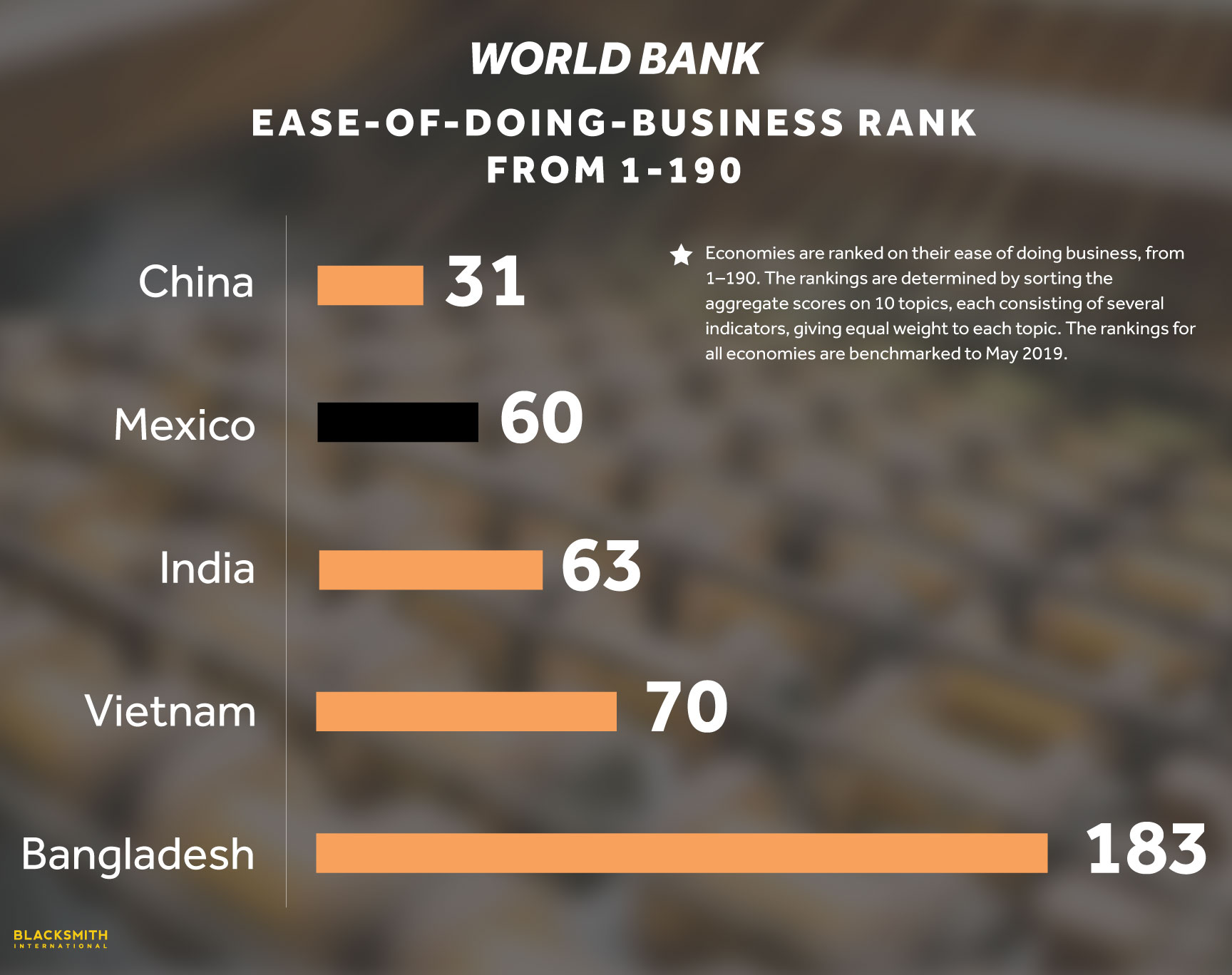 One of the many advantages of manufacturing in Mexico is the low cost of labor. The minimum wage increased in January 2019, making the daily minimum wage US$5.10. Municipalities near the US border have a higher daily wage of US$8.79. Minimum wage can be a good way to predict the cost of labor, but it’s important to note that labor cost varies significantly depending on the factory and region. Fortunately, wages in Mexico tend to be steadier than those in Asia, making it easier to predict this portion of your cost.

Expensive materials and outsourcing will always raise the overall cost of your product. Fortunately, Mexico has created special programs that can help lessen this cost. IMMEX is a program that allows foreign manufacturers to import necessary machinery and raw goods on a temporary tax and duty-free basis. The companies that work with the IMMEX program enjoy special income taxes and other benefits, further lowering cost.

Another aspect of your cost to consider is shipping. This will vary depending on the courier and method you choose, as well your location. Mexico’s close proximity to the US could save you significantly in this aspect. Here’s an example from NAPS: Shipping a 53-foot container from China to Los Angeles in 2018 cost approximately $5,000. The same container cost only $600 to ship from Mexico.

Mexico is one of only 20 countries that has an active free trade agreement with the US. As tariffs continue to rise in China, those manufacturing in Mexico will benefit significantly from The North American Free Trade Agreement (NAFTA). NAFTA is the largest free trade agreement in the world and could potentially save you from expensive tariffs when importing your manufactured goods. In 2018, the US, Canada, and Mexico signed a new agreement (USMCA) to replace NAFTA, but this has yet to go into effect. 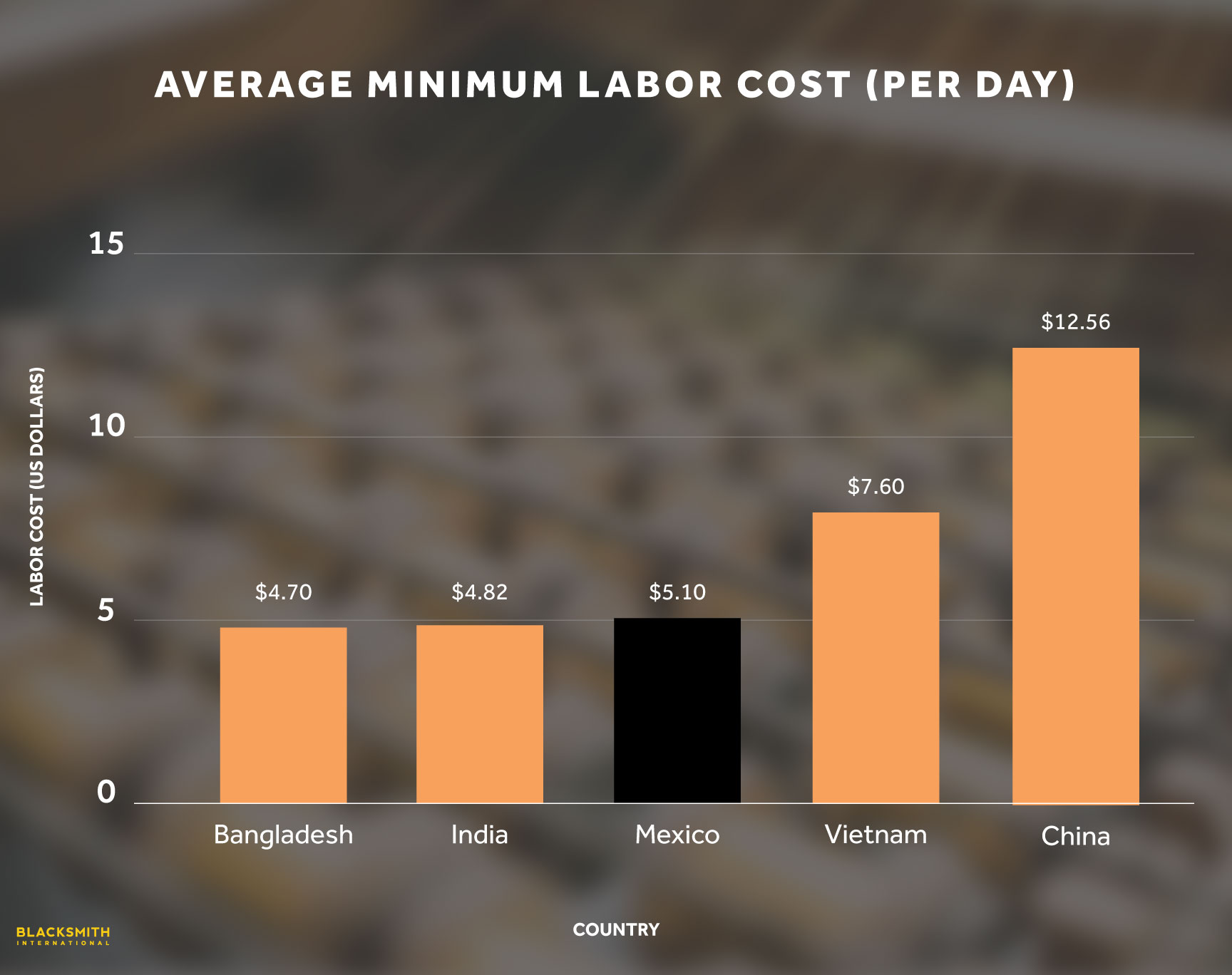 Do Your Due Diligence

If you’re considering moving your supply chain to Mexico, you may be concerned about security. While traveling to certain areas of Mexico can be dangerous, acts of violence against foreign and domestic employees in the manufacturing industry are relatively uncommon. If you’re concerned about this, you should consider finding a manufacturer located in a gated industrial park. These parks are typically equipped with 24/7 security.

Security is just one of many factors you should consider when looking for a factory in Mexico. You should also investigate the finances, certificates, and creditworthiness of any potential supplier. Do they have the money and resources to manufacture your product? Will they be able to complete the project within your timeframe? Will they hold up to your standards of quality? Asking these questions before making a commitment will help prevent problems in the long run.

Finding the perfect supplier can be a lot of work, and you might not have time to thoroughly research all of your options. Thankfully, Blacksmith does. We work with more than 1,500 global vetted factories and can find the perfect fit for you, your product, and your budget. Let us do the due diligence for you.

Get Your Product Made Right

Get Your Product Made Right
Page load link
Go to Top